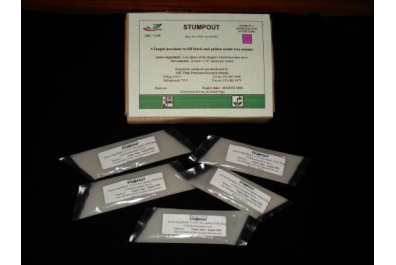 Black and golden wattle trees (Acacia mearnsii and Acacia pycnatha) are considered an invasive alien species in South Africa, they out-compete and replace local fauna and consume more water than many of their indigenous counterparts. Cylindrobasidium laeve, is a fungus that is indigenous to South Africa. ARC has harvested it from dead black wattle stumps, where it was found to have a unique property as a biological control agent to prevent coppice growth of felled Wattles. Cylindrobasidium laeve is saprophytic, meaning the fungus feeds on dead organic matter, such as rotting wood. We have since developed this fungus into Stumpout®, a user-friendly and affordable treatment to prevent cut stumps of black and golden wattles from resprouting after felling. By applying Stumpout® to the felled or burned stump of the wattle, it prevents regrowth and further prevents multi-stemmed trees from developing. Multi-stemmed trees are more difficult and more expensive to control and thus more difficult to clear. Stumpout® is predominantly used during the summer months, although it can be applied all year round.  The great advantage of Stumpout® is it is harvested near George and Joubertina in the Western and Eastern Cape, creating local job opportunities. Further, it is completely environmentally friendly, user-friendly and very affordable. It is not a pathogen or a chemical herbicide and thus has none of the negative environmental impacts of those approaches to eradicate Wattle species. Stumpout® is, therefore, safe to use in areas close to water sources without concern for contamination.