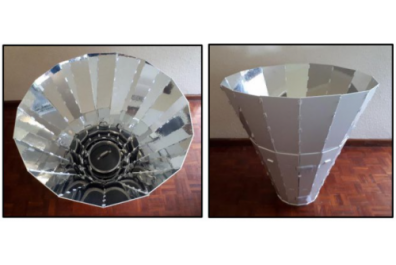 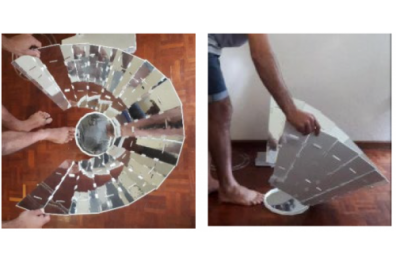 This solar cooker is small enough to be packed into a backpack in its collapsed form and carried by one person. In its fully assembled state, it takes the shape of a cone.

The cone is formed by two tiers of tapered panels. The top tier rests within the bottom tier and the bottom tier is wrapped around a base plate with a grip to prevent the cone from collapsing inwardly. A transparent ring, called the pot support ring, rests on the inside of the bottom tier that supports the pot. It holds the pot slightly above the base of the cone. The panels that form the tiers are connected by ribbon hinges and each tier is secured in its assembled form with Velcro straps.

The entire cone structure (base, the tiers and the pot support ring) is made from Plexiglass and a reflective material is adhered to the inside of the tapered Plexiglass panels to reflect the sun and to focus the heat on the cooking pot.

There is a need for the licensee to develop the prototype further and to particularly assess: