Improving the Yields of Protein Production in Plants

In recent years, the production of heterologous proteins using plant expression systems have come to light as a cost-effective and scalable alternative, leading to a paradigm shift for the pharmaceutical industry.

Plant-based expression systems are particularly appealing to resource-limited countries, as their raw material and infrastructure cost requirements are much lower than those of conventional pharmaceutical production.

The commercial viability of any plant-made pharmaceutical is largely governed by the expression yield which generally needs to exceed 1% of the total soluble protein.

However, this threshold is seldom realised and expression levels remain a challenge for many heterologous proteins, particularly viral glycoproteins.

Instead, a threshold of 50 mg/kg has inadvertently become the gold standard after the development of a plant-produced influenza haemagglutinin candidate for clinical trials by top industry players.

A recent trend to improve the yield and quality of plant-made pharmaceuticals (PMPs) has resulted in extensive efforts to manipulate the plant host cell environment beyond just the expression of the heterologous protein of choice.

Researchers at the University of Cape Town (UCT) have developed a method for increasing the expression of a heterologous polypeptide of interest in plant cells.

The invention encompasses the co-expression of the human molecular chaperones (calreticulin, calnexin, GRP78/BiP, protein disulphide isomerase and/or ERp57) to improve the expression of heterologous glycoproteins in plants.

According to the invention, human calnexin improves the expression yields of a membrane‑bound HIV Envelope glycoprotein co-expressed with HIV Gag for efficient production of virus-like particles.

The researchers have shown that gp150 may be expressed alone, or in the presence of HIV Gag to produce a virus-like particle presenting HIV Envelope. The Gag antigen may be a naturally occurring protein isolated from a virus or a synthetic antigen designed in silico. A Gag subtype C mosaic antigen designed in silico to maximize the coverage of potential T cell epitopes was used. The Envelope gp150 sequence was modified to replace the native cleavage sequence with a glycine-rich linker peptide to circumvent the need for furin-mediated cleavage which does not occur in plants.

The inventors have proven the positive impact of co-expressing heterologous mammalian chaperones in plants to improve the production of a recombinant protein in terms of both yield and protein folding, which is an important factor in the correct expression of proteins.

They have also highlighted the remarkable plasticity of the plant proteome, which can be manipulated for the production of high levels of pharmaceutically relevant proteins.

The technology is also applicable for the production of virus-like particles.

UCT is looking for industrial partners especially those in the plant expression space to commercialise the technology. 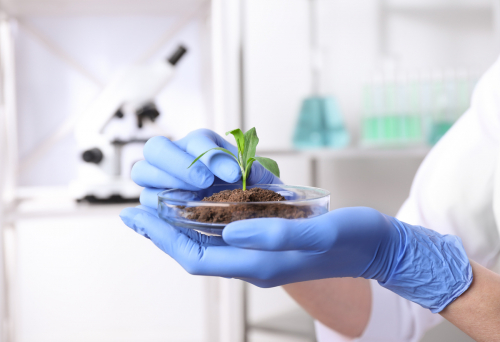