Currently, there are two ways of administering anaesthesia: either by administering the anaesthetic agents by gas or through intravenous administration. The drawbacks of inhalation anaesthesia are that they can cause side effects, particularly respiratory[1], have a negative impact on the environment and require large instrumentation to work efficiently.

Total intravenous anaesthesia (TIVA) is often used as an alternative mode of administration. In this mode, the anaesthetic agent is delivered directly to a patient’s bloodstream by an infusion pump (automatic) or manually via a syringe (i.e., as an intermittent bolus). TIVA has the benefit of decreased post-operative nausea and vomiting and of ensuring more rapid recovery[2]. Infusion pumps are also typically compact and portable.

In TIVA, the anaesthetic agent concentration cannot be measured directly, but the blood and effect‐site concentration are estimated using mathematical algorithms built into the infusion pump. The anaesthetic can then be administered to a target effect‐site concentration, and this is known as a Target‐Controlled Infusion (TCI). The mathematical model is based on patient demographics obtained during pharmacokinetic (PK) studies to make these predictions. These predictions are accurate and have clinical relevancy.

TCI pumps contain PK models for some of the drugs used in daily anaesthetic practice, such as Propofol. However, the models are dated, and newer models have not yet made it on to the latest devices due to the cost of implementation and slow regulatory processes (automatic TCI devices are categorised as high-risk medical devices). Currently, the newest pumps only include PK models from the early 2000’s, where the latest models have been published as recently as mid-2018.

The older models have significant limitations in their applicability to a broad population (e.g. does not adequately apply to children and babies or very obese patients, etc.), which adds to the user complexity in choosing the correct model.

There is a need for anaesthetists to have access to the latest PK models to inform the administration of customised boluses to their patients.

Researchers at the University of Cape Town (UCT) have developed an assistive device that can be attached to a manual/analogue intravenous anaesthetic pump or syringe, that calculates the predicted drug concentrations in the blood using up-to-date pharmacokinetic models and that allows the user to administer the correct bolus manually.

[1] Ramgolam et al, “Inhalational versus Intravenous Induction of Anaesthesia in Children with a High Risk of Perioperative Respiratory Adverse Events: A Randomized Controlled Trial” Journal of the American Society of Anaesthesiologists, June 2018

The invention, called Target Guided Infusion (TGI) Device, is an attachment or accessory to a manual/analogue intravenous anaesthetic pump or syringe.

The TGI can be used with infusion pumps that do not automatically calculate the infusion rate and administer the agent. The anaesthetist or seditionist connects the drug syringe or pump to the infusion device and then attach the TGI on top of it. As the drug is administered, the TGI device will track the administration and calculate the predicted drug concentrations in the blood using up-to-date pharmacokinetic models. The clinician can then administer the drug manually using a syringe or a pump. The TGI device does not self-administer the drug, since it does not contain an infusion driver.

The device guides the user to know how much a syringe is to be displaced (i.e. compressed) in order to reach a target drug concentration in the patient based on a PK model.

The device “clips” onto any analogue diffusion device and provides the anaesthetist with the digital bolus delivery tracker on the analogue device.

The benefits of the TGI Device include:

The TGI device gives anaesthetists the ability to track administration of anaesthetic and/or pain boluses on infusion pumps that do not have this feature, giving the anaesthetist additional measurement capabilities, especially during longer operations.

UCT is looking for a partner who is interested in further developing and commercializing the TGI device.

Our inventor has built a working prototype. In its current format, it is a 3D‑printed device capable of tracking the volume of delivered anaesthetic and it has a simple interface.

The opportunity is for a company to add value in an industrial design and development process, and sell this to anaesthetists using analogue infusion pumps to benefit from its value proposition. Furthermore, there is an opportunity to develop a software interface that complements the backend.

An ideal licensee will have access to the sales and distribution value chains that complement the sale of anaesthetic and analgesic drugs.

Since the TGI is an assistive attachment that measures the delivery of a bolus and administers the bolus manually, not automatically, it is likely to be classified as a lower-risk medical device for the purposes of obtaining regulatory approval. 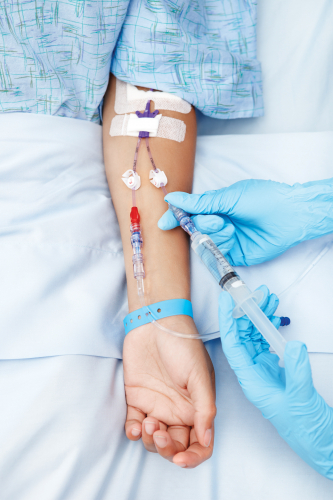