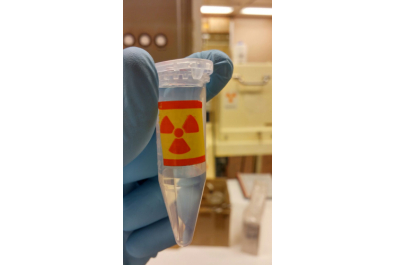 A Disintegrin and Metalloproteinase (ADAM10) is a cell-surface-expressed metalloproteinase. It is a type of protein enzyme with a catalytic mechanism involving a metal. Playing a role in various processes including cell adhesion (cells interacting and attaching to neighbouring cells), proliferation (cell growth and division to form new cells) and proteolysis (breaking down of proteins), it has often been equated to a type of biochemical “scissor”.

Altered expression of ADAM10 proteins, and consequently their enzymatic activity, has been associated with several diseases including asthma, arthritis, neurodegenerative diseases, atherosclerosis, and cancer. It has been shown, for example, by Venkatesh et al[1] that by binding to its receptor, ADAM10 inhibitors are able to impede the growth of adult and paediatric glioblastoma cell lines. As such, inhibition of ADAM10 has potential as a chemotherapeutic target.

Currently, several molecules or peptides exist that are claimed to be therapeutic inhibitors of ADAM10.

In South Africa, cervical and oesophageal are among the most common cancers and generally do not present symptoms until a late stage. Hence, diagnosis is likely only made after the cancer has spread or is at an advanced stage. According to reports from the Cancer Association of South Africa (CANSA), cervical cancer is the second most lethal cancer among southern African women (breast cancer is the first). As such, it is important to focus on the early detection and treatment of these high incidence cancers and their impact in a southern African setting.

Microarray analysis at the University of Cape Town (UCT) associated elevated expression levels of ADAM10 with the development and progression of cervical and oesophageal cancer. This led to a collaborative project for the radiolabelling of an ADAM10 inhibitor with a diagnostic radionuclide and/or therapeutic radionuclide, as a potential anti-cancer theranostic. The IP is co-owned by UCT, the National Research Foundation’s (NRF) iThemba Labs and the South African Nuclear Energy Corporation SOC Limited (NECSA).

The theranostic approach couples diagnostic imaging and therapy using the same or a similar molecule, which could be radiolabelled with a different isotope or administered in different dosages. The approach allows one to visualise the treatment target, therefore allowing one to monitor the efficacy of the treatment. This approach also helps to ensure that the correct dose of chemotherapy is provided throughout the treatment and adjusted based on the feedback information from the diagnostic radionuclide. The feedback will greatly reduce the patient side effects as only the correct amount of chemotherapy will be prescribed, with little to no excess.

More specifically, the invention is a hydroxamate metalloprotease inhibitor for use in diagnosing or treating cancer, inflammatory diseases, or Alzheimer’s disease. The inhibitor further comprises a zinc-chelating N-hydroxlamine moiety radiolabelled by a radionuclide for either diagnostic imaging or therapeutic purposes.

UCT is inviting entities who may want to explore the development of this technique for other diseases or may want to support the partners in further developing the technology for the anti-cancer application, to contact us.

To date, in vitro experimental work that has been conducted include the following:

An in vivo (small animal model) is planned. This study will use a xenograft from a cervical cancer cell line (HeLa), as preliminary results show a good uptake of the radiolabelled compound in HeLa cells. For tumour growth, the cells will be implanted subcutaneously above the proximal tibia of rats. This will take place at a set time point before the study commences. In total, 24 rats are included to optimise the xenograft model.